Today we would like to tell you the story about two Greek deities to whom bags are related as a symbol. 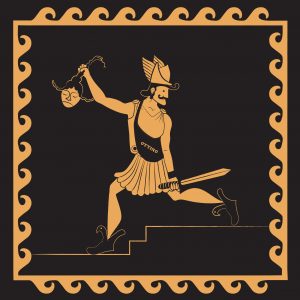 The history of the bag starts a long time ago: the primitive population made them out of animal hide and their use was a mean of transportation, for weapons and utensils. In the Middle Ages, with the introduction of coins and with the proliferate of trade, the first bags, as we know them today, were born.

Mercury and his pouch

Mercury is the god which represents movement by excellence. He is the messenger of the Gods and the one who leads the mortals into the underworld of hades. He is also God of travelers, shepherds traders and thieves.

The symbols of these features are found in his clothing: cloak, boots and helmet; and as a God of trading he has attached to his belt, a leather pouch closed with a string or a ring.

Mortals generally hid this accessory from view but, in the descriptions of Mercury, the purse is shown without modesty, as a symbol of divine generosity. So it seems that Mercury, is the first figure in history of art, to show this accessory.

Perseus and his bag

In the Olympus there is another character of the Greek Mythology where the bag plays a fundamental role. Perseus is a demigod. He is the son of Zeus and of mortal Danae.

Danae, courted by Polidette sovereign of the Island of Zefiro, was exiled there with her son. In exchange of his mothers freedom, Perseus promised the Tyrant the head of Medusa.

Medusa is a monster, in Greek Mythology she is known to turn into stone whoever crossed her gaze.

We find in the equipment of Perseus for his challenge, a bag, Kibisis in greek in which Medusas head is carried. The story tell us that Perseus, during his trip back, uses Medusas head to turn into stone the enemies he meets.

Maybe the Greek myth is the oldest story that, to this day, tell us the essence of the contemporary hand bag. An accessory to show, which encloses something to protect, an object to be seen on the outside but of secret contents. Good manners teach us not to look inside. There is a saying: “To look in someone else bag is like reading a secret diary”.

Perseus story teaches us something more: to look into someone else bag can be very dangerous. Not by chance it is the favorite accessory of women.